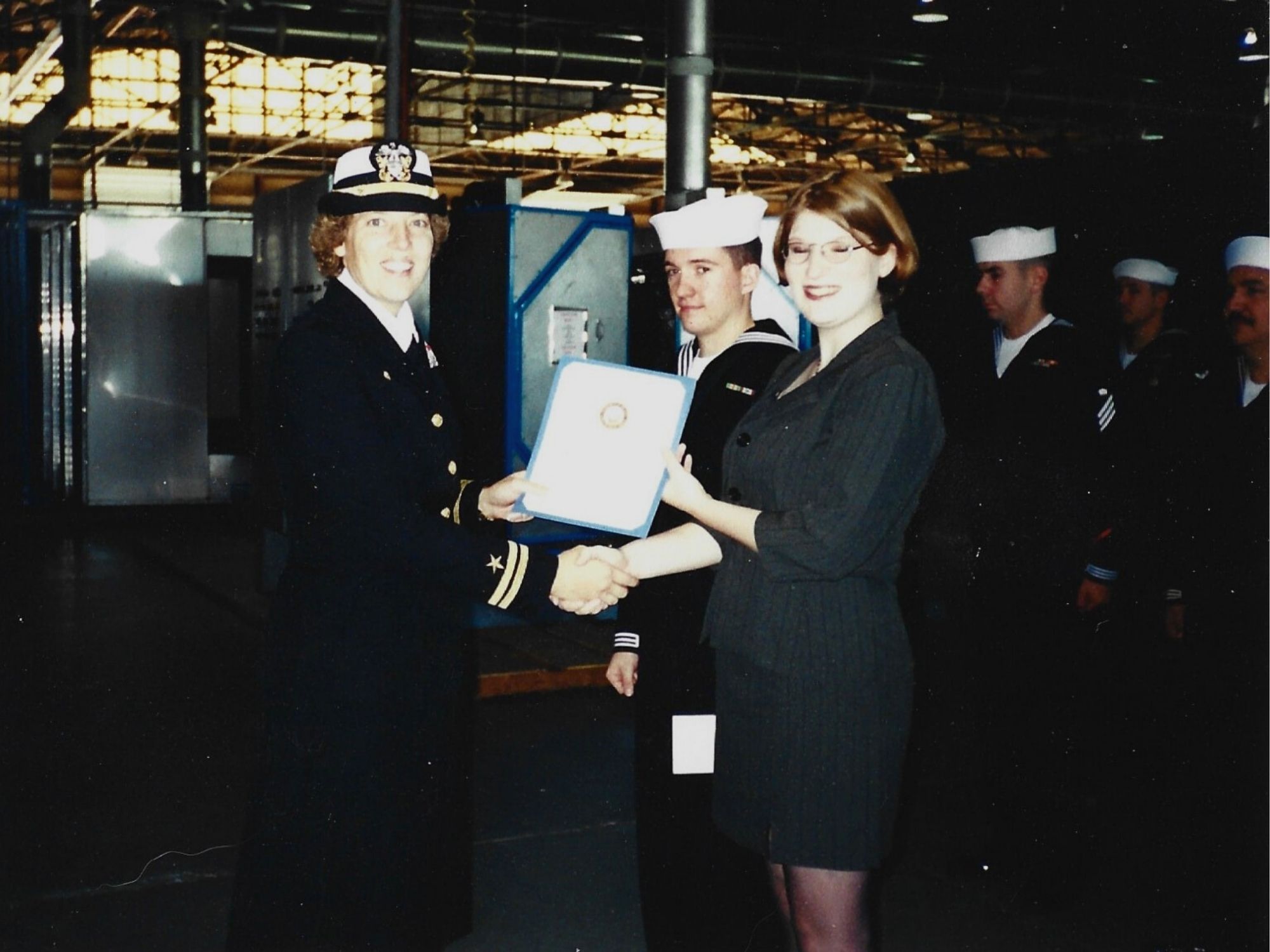 At Activus Connect, we are proud to highlight our honorable veterans and their impactful life experiences. This week, Wendy Davis, one of our Team Experience Coordinators, shares her incredible story of service in the Navy as a military parent.

Wendy grew up in Los Angeles, California, but moved to Arkansas, in the early nineties. Her dad was an Army veteran in the Vietnam war before she was born, so Wendy grew up with an understanding of the military through her father’s teachings.

“American pride was huge in our household and the honor of fighting for our country,” she said. “Those core values of commitment, courage, and honor that the military promotes were instilled into my brothers and me at a very young age. Whenever I looked at the military as a child, I always remember thinking it was the greatest thing you could do for your country.”

Enlisting at a Young Age

Like her father before her, Wendy was 17 when she first signed up. She joined the US Navy in 1997 and remembers celebrating her 18th birthday at boot camp in Chicago.

After completing her sea school training in the US, Wendy’s first duty was in Guam, a small United States territory in the North Pacific Ocean. Soon after she arrived, she began a relationship and soon became pregnant.

“I was so young that I was barely an adult myself, and I certainly didn’t know how to take care of a child,” she recalled. “My boyfriend and I decided to take the adoption route, which was a difficult, but necessary decision to make. It was a tough time in my life.”

At that time, the military would not assist with adoptions. Guam was not an adoption-friendly location, so the young couple had to navigate through endless challenges before finding a perfect military couple on the island.

“They had been trying to have children for over ten years, so they were over the moon when we found them,” she said. “We started the adoption process while I was still pregnant, and my daughter was born shortly after I turned 19. I am very grateful that we could reconnect as adults and have recently even met in person. We now keep in touch regularly, and it’s wonderful to be in each other’s lives again.”

The Navy sent Wendy from Guam to Texas, where she became one of the first women ever stationed on the USS Kingfisher. This minesweeper vessel had the dangerous job of hunting mines from ocean minefields.

“The Navy was doing a trial to see if they could station women on minehunters, which were predominantly male ships at the time,” she said. “I volunteered and became one of the first four women ever to come aboard, eventually receiving the Sailor of the Year award.”

A few years later, when Wendy was 21, she and her boyfriend—who was also in the Navy—got married and had another daughter together, the year before September 11th, 2001.

“I missed her first birthday because I was sent away to New Orleans during 9/11 and then to Bahrain,” she said. “Luckily, my husband at the time was on shore duty, so he was able to take care of her while I was away. There is a saying in the military that children aren’t issued with your seabag, which means you can’t always be there for them once you sign up to do your service. That’s the harsh but unavoidable reality of having kids in the military.”

Wendy left the active service in 2002, choosing to join the reserves for the next two years. She moved back to Guam with her daughter and lived there as a civilian for several years before returning to the States.

“I was a bartender over there, and we spent a lot of time together just enjoying the island life,” she said. “My daughter even learned how to speak Japanese and Tagalog, as her babysitter was Filipino. Wendy wishes that she would have kept up with her daughter on speaking those languages after they moved away from Guam.  It was super laid back and very different from living in the States.”

After leaving Guam, Wendy and her daughter moved back to Arkansas, followed by a move to Texas, where she met her current husband from Jacksonville.

“We’ve lived here in Jacksonville for a little over 12 years now, which is the longest I’ve lived anywhere,” she laughed. “We did a lot of traveling when I was in the military, and I took advantage of that. Whenever I was out of active duty, my daughter and I would experience as much of the world as we could. We learned so much about different cultures and learned to be appreciative of what we have here in the United States.”

Part of the Activus Family

Wendy joined Activus Connect a year ago to lead an essential process critical to the support of one of our valuable clients. In her short tenure, she has utilized her life-long skills to progress her career quickly and is now a Team Experience Coordinator (TEC.)

She tells us how important it is to work for a company that appreciates its employees and wants to give back to the community. Hence, she intends on sticking with Activus Connect for the foreseeable future.

“The way I live my life, approach my career and raise my children are all influenced by the core values I learned from the military, such as honor, courage, commitment, discipline, and dedication,” she said. “The way I dedicated myself to the military is the same level of dedication that I have to Activus. I take pride in my work and find great honor in what I do for a living.”