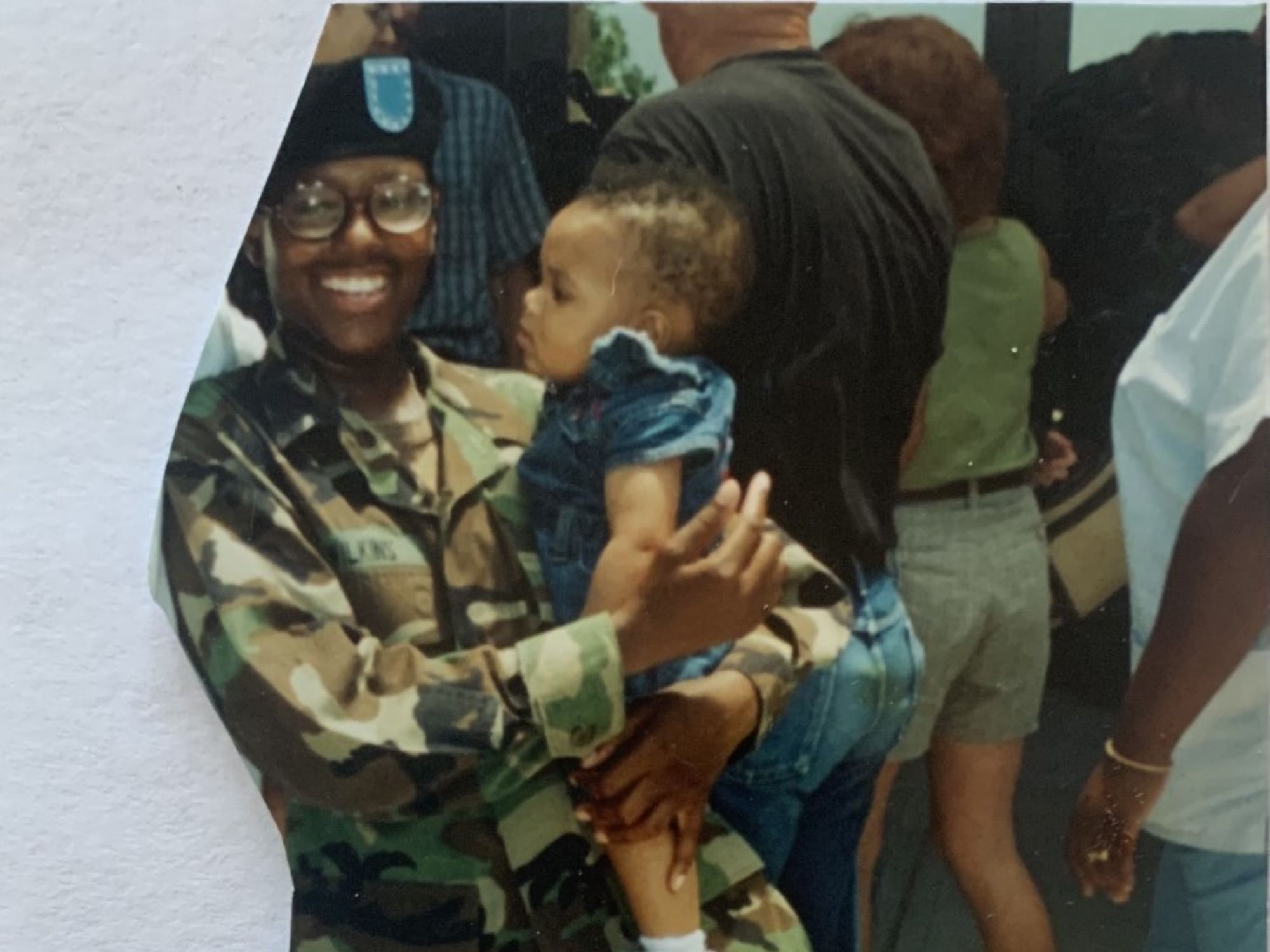 At Activus Connect, we are proud to share our honorable Veterans and their families’ impactful experiences. Let’s kick things off with Ruth Sadler, one of our incredible new Ambassadors, to learn what it was like growing up with a parent who served in the military and then becoming a military parent herself.

When Ruth was growing up, she and her sister lived with her grandmother in Virginia while her dad served in the Navy on the USS Theodore Roosevelt. He stayed in the military for ten years, joining when Ruth was five and leaving when she was fifteen.

“Due to a lack of good communication technology at the time, we didn’t hear much from him when he was away, but he would come to spend time with us when the ship was back in port, or we would visit him at the Navy base, which was always a memorable experience,” she said.

Ruth’s father would spend six months away from home every year during that time, but the base was only 20 minutes away from her grandmother’s house. So they would often visit to see air shows and participate in other family-centric events when he wasn’t out to sea.

“I was lucky enough to have a great childhood, make strong friendships, and enjoy school, but my dad’s absence was difficult at times—those six-month tours were pretty hard for us,” she said.

Despite the challenge of her dad’s absence, Ruth learned a lot from him thanks to his time in the Navy.

“On the practical side, aside from learning about preparing dehydrated MREs (meals ready to eat), he taught me to fish—being that they were always on the water—and how to apply a splint to broken bones,” she said. “I also learned a lot about integrity and morals, which were super important when I joined the military myself.”

Ruth believes that if you don’t have morals, you can’t work as a team, no matter whether you’re in the military or a company like Activus Connect. “You’re not in it for yourself; you’re in it to make a difference for others,” she told us.

Raising Children as a Full-Time Sargeant

Ruth was 17 when she had her first child, and she already had a strong desire to join the Army. Joining the military was not only an admirable choice but an adventurous one as well, as she had personally discovered as a military brat.

“When I had my daughter, I knew I wanted to leave Virginia,” she remembered. “The Army was one of the best ways that I could make a better life for her, offering stability and the chance to travel, so I joined when she was six months old.”

Ruth went through basic training in South Carolina, which took three months. She then started advanced individual training (AIT) in Virginia, which allowed her to reunite with her daughter, who was being cared for by Ruth’s mother. When her daughter was around one and a half years old, Ruth gave birth to a son, but her military career was already in full swing by then.

Ruth was a sergeant and would sometimes stand in as the platoon sergeant when needed. “I didn’t consider them soldiers; I viewed them as family. I would treat them as if they were my kin, checking that they were okay, trying to influence good choices, and helping them to learn positive life lessons along the way,” she said. “I would even occasionally bring my kids to the formation with me, have them order my soldiers around, take them to ceremonies and family barbeques. We all had a lot of fun.”

Unlike her father’s long tours away, after her initial training, Ruth’s time away was much shorter, allowing her to be there for her kids more frequently. Ruth served in the Army for ten years, like her father before her. For the first four years of this time, Ruth was married, but she spent the last six years as a single parent, adding a new challenge to overcome.

“Luckily, the Army provides many resources for single parents, and the daycare was great about teaching children things like swimming, CPR, cooking, and other important life skills,” she said. “It was great to have something to keep them occupied while learning while I was working. They also had single parent retreats, like weekends at Great Wolf Lodge, so even the adults had support and an opportunity to unwind a bit.”

Ruth was deployed to Afghanistan when the kids were six and seven years old. Towards the end of that deployment, her grandmother got sick, so her mother had to take care of everyone. It was then that Ruth decided to come home. “It came down to me being a mother first,” she said.

Ruth now lives with her two children, 17 and 15, in South Carolina. She joined the Activus Connect family as an Ambassador in February 2021 and is looking forward to her future career with us.

“I feel like the military gave me the skills I needed to shape my professional future, so I’m putting that theory to the test at Activus,” she said. “It taught me how to take care of people, recognize what’s important, and prioritize the right things, which are super important skills for a healthy and well-balanced life.”